I discovered Against Me! thanks in part to Mitch Clem’s seminal punk rock webcomic Nothing Nice to Say. It was right before Searching for A Former Clarity came out and I was knee deep in the Tony Hawk’s Pro Skater soundtrack phase of my life. Bands like Lagwagon and Millencolin maintained a residency in my ’92 Chevy Blazer’s after market CD player. This was the type of punk that was for me, loud and fast, but more importantly melodic and fun. I couldn’t get into bands like Circle Jerks or The Adicts and I got burned out on bands like Bad Religion and Pennywise. Clem playfully poked fun of Against Me! for “selling out” by going to Fat Wreck Chords for their previous LP The Eternal Cowboy . This intrigued me, so I went to the Fat Wreck site and downloaded the song “Cliché Guevara.” I’ve been a fan ever since. 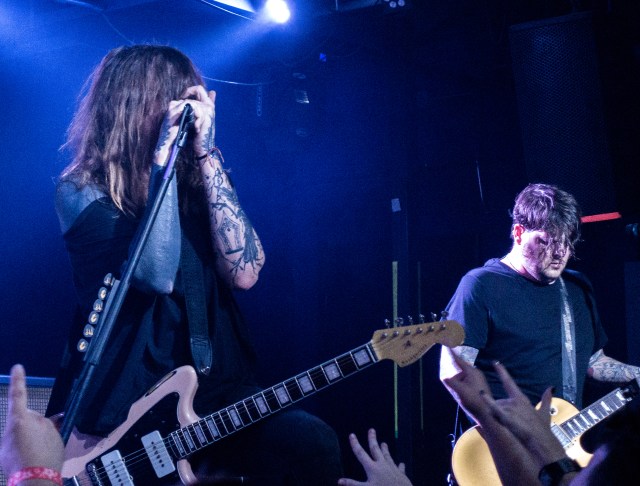 On September 22, Against Me! played to a crowded, muggy Paper Tiger. They left everything on the floor. This is why they have been able to stay relevant over the past decade and a half. This was the fifth time I’ve seen them and their exuberance shined through their performance the same way it did when I saw them the first time 11 years ago at Warped Tour. A lot has changed in those 11 years both for the country – the political climate of our nation has reached what feels like a new level of division – and for the band – only two members remain from the lineup that played that Warped Tour and lead singer Laura Jane Grace came out as transgender – but one thing that has remained the same is the excitement of their live show. 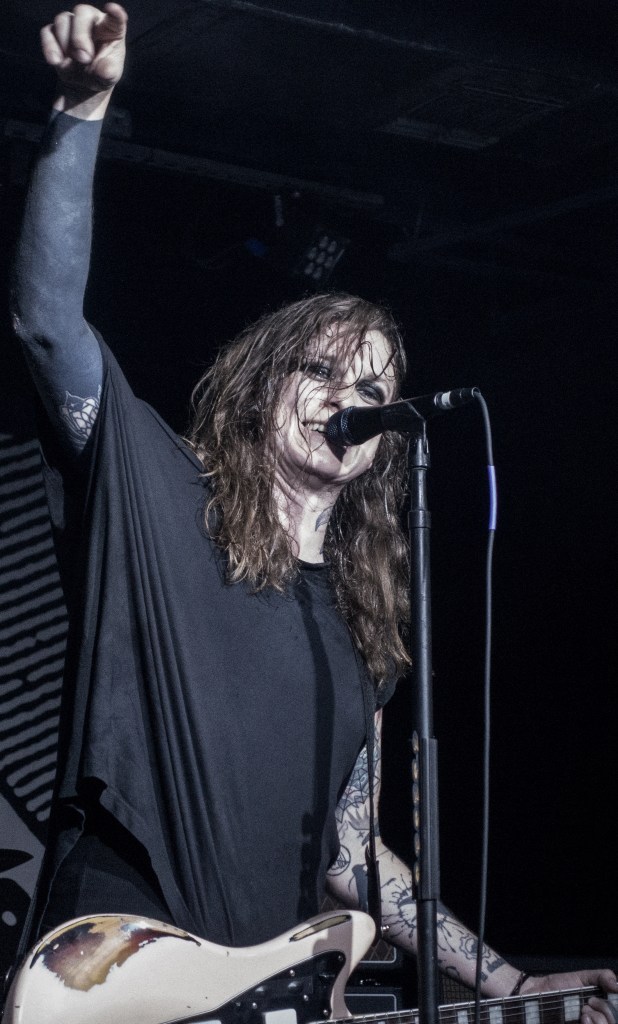 Against Me! came into my life at a point where I began establishing a political opinion. I had voted for Ralph Nader and Ross Perot in previous school mock elections – the former because I was contrarian by nature and the latter because he was lampooned as a character on Nickelodeon’s All That around that time. Needless to say, politics was foreign to me, but by the time I was a junior in high school I started paying attention more. It was almost impossible not to pay attention in a post 9/11 world. Against Me! is a politically-charged band and they opened my eyes to a lot of the realities of the world. They’re a big reason, I began to try and stay informed about world news. The song “From Her Lips to God’s Ears” might have been one of the first songs that really made me think about the current state of affairs. The band also funneled me into the world of folk punk – political bands like Defiance, Ohio and This Bomb is a Pipe Bomb became staples of my winamp folder. 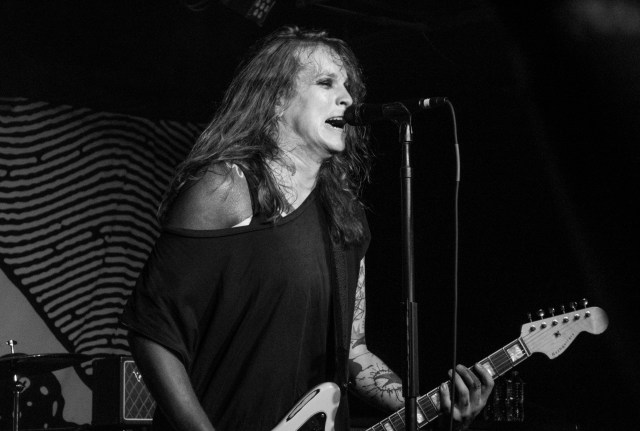 The band is very keen about having diverse lineups on their tours. I’ve never gone to an Against Me! show that didn’t include an opening band I was excited about. This show was no exception. They brought along Canadian trio The Dirty Nil – a band I learned about a few years ago via scrolling through Youtube videos and literally got a ticket to Warped Tour just so I could go see them. It’s difficult to describe The Dirty Nil in words. I always like to say they sound like Weezer if Rivers was really into Fugazi instead of Kiss, but that still doesn’t do them justice. There is definitely an element of 90s alternative rock with punk rock origins in their sound, but they also have this over the top sound that would make Gene Simmons throw a devil horn up in approval before he went off to sell out some more. They have this big arena rock sound that vibrates through any crowd all the while making good old-fashioned punk music. Being the opening band, the crowd was sparse but they played as if the Paper Tiger was filled to the brim, striking chords that cut like a knife. 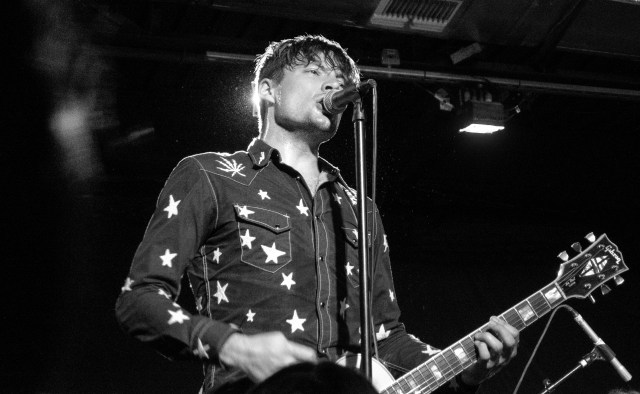 Bleached followed The Dirty Nil with a rocking set of their own. I finally got to cross Bleached off my list of bands I needed to see. I’ve had so many opportunities to see them in the past that fell through that I was beginning to think it just wasn’t meant to be. I’ve grown really fond of bands that channel 60s girl groups with a more aggressive punk sound. Bands like Vivian Girls and Best Coast ultimately led me to discover Bleached. However, the band also brings a 70s arena rock vibe to their sound that makes their show that much more enjoyable. It’s a little reminiscent of bands like Damone or that one really popular Donnas album Up All Night, but the punk vibes are flowing more than either of those. Bleached did a cover of “Skulls” by The Misfits for AV Undercover last year that is easily my favorite Misfits cover of all time. While I was a little bummed they chose to cover “Hybrid Moments” at the show instead, it was too good not to dance around like no one was watching, with one fist in the air. 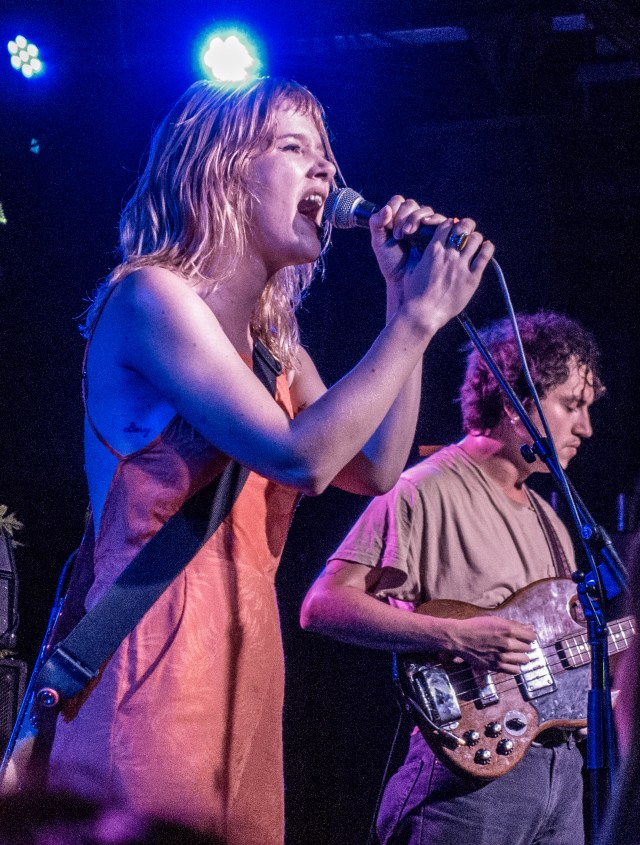 The last time I saw Against Me! was in 2015. Cheap Girls and Laura Stevenson opened up for them and it was great, but I was extremely disappointed that they did not play “Reinventing Axl Rose.” How could they not play it? That’s like Guns ‘n’ Roses not playing “Sweet Child of Mine.” My mind began racing with theories to explain this. I immediately hypothesized that maybe they thought it was hypocritical for them to continue to play a song with such DIY punk ethos while on a major label and opening up for arena rock tours. I felt stupid for thinking this because 1. I am not the punk rock police and 2. The song “I Was a Teenage Anarchist” always felt so meta and self aware that the band had evolved to a point of being above the made up rules of “selling out.” I sulked into condescending myself to this point, but I still wondered why they didn’t play the song. 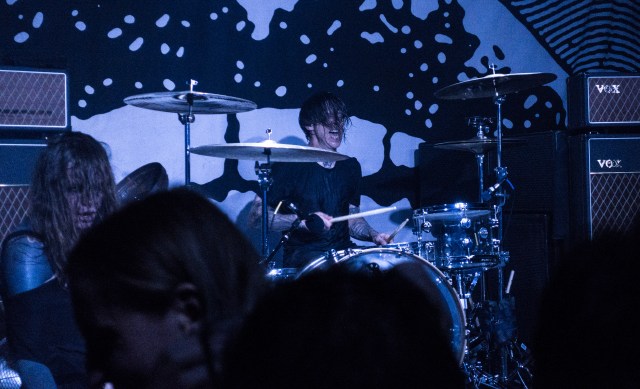 I like Against Me! but I love their debut album Reinventing Axl Rose. Everything they’ve done after The Eternal Cowboy, I have enjoyed but I don’t get the same satisfaction out of those songs that I do when I hear the songs from Reinventing Axl Rose. I once wrote a list of my favorite albums of the 00s and listed The Eternal Cowboy over Reinventing Axl Rose because I’m so contrarian by nature, I thought it was too obvious to put Axl Rose up there. Believe me, I want to kick my ass probably as much as you do right now. The funny thing is, by the time I heard it for the first time, Searching for a Former Clarity, their major label debut, was hitting the airwaves. I had only owned the Acoustic EP of theirs and had never heard the non-acoustic versions of those songs when I finally listened to Axl Rose. But when I did hear the album for the first time, it felt like something I always wanted but never knew until that moment. 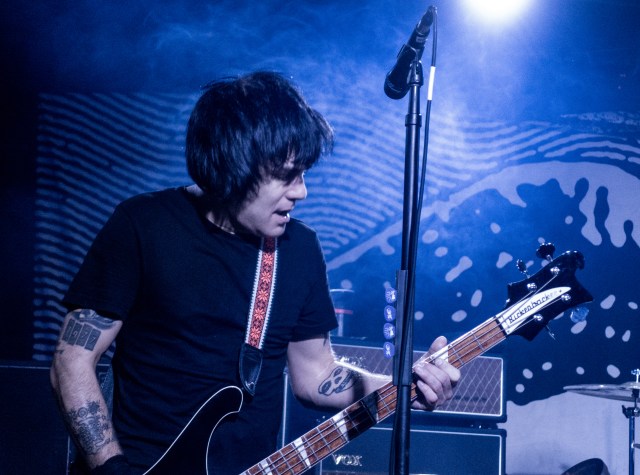 There’s a line in a song off the album “Those Anarcho Punks Are Mysterious” that goes “All of a sudden people start talkin’ bout guns, talkin’ like they’re going to war, because they found something to die for.” It’s always given me goosebumps. It was the first thing that came to my mind when mid set, Laura Jane Grace collapsed on stage. She was visually tired in the two songs prior, gasping for air at certain points and grabbing the mic stand with a little bit of desperation. Then mid song, she falls to the floor and after realizing this was serious, the band stopped playing to make sure she was okay. Now I couldn’t see her on the stage from my view, so I don’t know how she looked, but it was definitely concerning. After a brief stall to hydrate and get some electric fans on stage she continued the show like nothing happened. She was giving us everything she had. These are her songs, these are a part of her and she is sharing that with us. I’m not entitled to hear “Reinventing Axl Rose” just because I’ve associated the band with that song for as long as I can remember. Every song after that moment felt kind of like a gift and every song they played from Axl Rose felt like that moment you unwrapped a Nintendo 64 your parents got you even though they said they weren’t going to get it because deep down inside you knew you didn’t deserve it but were too happy to care anyway. Then they dedicated their next song to The Dirty Nil and Bleached and played “Reinventing Axl Rose,” and I almost had an asthma attack in the pit from dancing around. 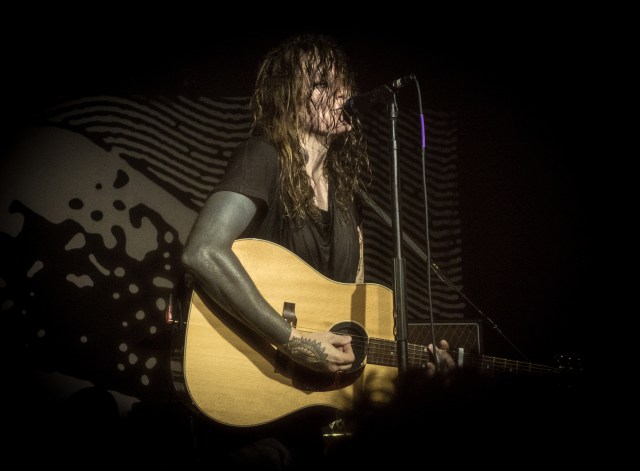 I left the show short of breath and drenched in sweat. I wore a plaid shirt from Wal Mart and the cheap material left an imprint on my arms from where I rolled up my sleeves. My body was sore, eyes were tired and voice was near gone. It was one of my favorite shows and was definitely the best time I had seen Against Me! I always like to think that great live bands remind you what it was like when you heard their music for the first time and Against Me! never fails to do that, but I think what they really succeed at in their live show is reminding why you go to shows to begin with. The raising of fists, the dancing around, the screaming your lungs out, it’s the feeling that everyone would leave with the memory that there was no place else in the world.