Two vodka waters and a tallboy in my chainsaw hand is doing its best to stay steady while I sneak pictures of Colleens performing a set of Kiss songs dressed as the Knights in Satan’s Surface themselves. I’m not drunk, I just feel good and that’s the vibe I get from the band as they party all night at the All Hallow’s Eve Tribute show at the Limelight. 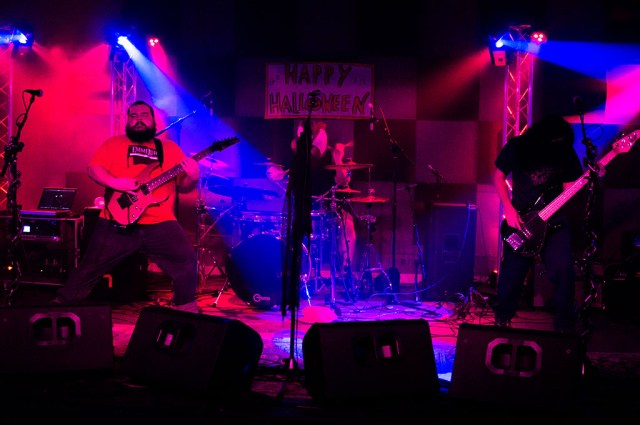 I was 19 and away in college when the annual show premiered and has been showcased at several revolving locations over the last decade raising money for different charities. This year all profits went Child Advocates of San Antonio. If you’re not familiar with the concept, local bands perform cover sets of a single band, in some cases going as far as cosplaying as the band themselves. It’s a San Antonio Halloween tradition that, after nearly a decade of missed opportunities, I finally got to experience for myself.

I show up to the Limelight early dressed as Bruce Campbell’s Ash from Evil Dead along with my girlfriend adorning a Pikachu costume.  Bitforce keep the Nintendo theme going with renditions of Koji Kondo 8-bit video game classics like Zelda, Punch Out and Super Mario Bros all while dressed like Mario, Luigi and Yoshi. The crowd slowly but surely filters in throughout the set, and I think had it been advertised they would be playing songs from video games, they would have been there from the start,but it was still the most people I had seen at a local show before 9:30 PM since high school. Our worries that we would be the only ones dressed in costumes dissolved as we look around to a sea of Halloween participants. 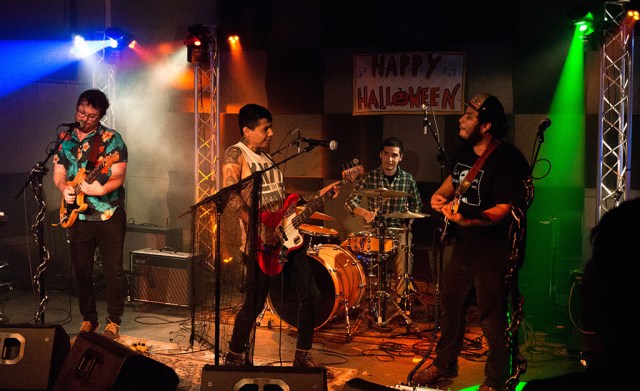 Members of Mission Complete! bring in an even bigger crowd with a set as The Strokes. While they didn’t dress up as the band, they are probably the most spot-on tribute in terms of sound. The lead singer did a great Julian Casablancas impersonation while the guitar twang was bright and reminiscent, if not homophonic, of The Strokes sound.

Local hardcore band Thin Ice had some members perform as POD, a band I haven’t listened to since high school and have most recently been in the same conversation as Katy Perry. Three songs in and the nostalgia hits as I suddenly remember the words to “Youth of a Nation” and start rocking back and forth to the tom rhythm that has become synonymous with the song. It’s sheer, non-ironic fun to be reminded you once thought nü metal was cool, and I mean that in the most sincere way possible.

We take a breather in between sets. The crowd is massive and while not to capacity, it’s enough to make my face drench in sweat to smear the fake blood. The syncopated drumbeat of “March of the Pigs” lures me back to get a good view.  To my astonishment, there is no drummer. Members of XRY and PINKO take stage as Nine Inch Nails channeling Trent Reznor’s 90s rebellion with the spoken introduction “Fuck You, We’re Nine Inch Nails.”  They utilize, what I believe is, a drum machine and samples masked by heavy distortion to match pre-Oscar Reznor sound. It works and despite minor hiccups they stay pretty solid although a real drummer could have brought more energy. 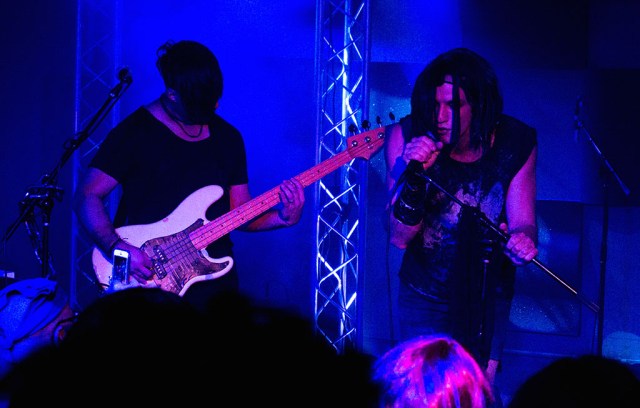 So, back to KISS. There was a point in my life where Detroit Rock City was probably my favorite movie. Obviously, I had heard of KISS before then, but that movie made KISS genuinely cool to me and I can quote most of the movie start to finish. When I reached my punk rock phase, I obviously realized that bands like KISS embodied everything that I thought I hated about corporate arena rock blah blah blah. While I have grown up a lot since then and don’t have such strong feelings towards corporate rock, it was still difficult for me to hear mention of KISS without rolling my eyes. Until this night.

While Colleens aren’t the most proficient band of the night, they were by far the most fun. Not only are they in full KISS make-up, but they even stay true to the nature of the band itself. They aren’t dressed up as KISS, no they are KISS. They talked to each other in character, they play each part according to which member they are playing and then the drummer comes out to sing “Beth” while Ace plays keys and Gene and Paul pass out PBR tall boys to the crowd. They even go so far to dip into the band’s foray into disco playing “I Was Made for Loving You,” and dedicating songs to the ladies in the crowd.  It’s a perfect ending to a great show and Colleens transforming themselves the way they did completely encapsulates the spirit of the show itself. It was a treat to be tricked into rock ‘n’ rolling all night. 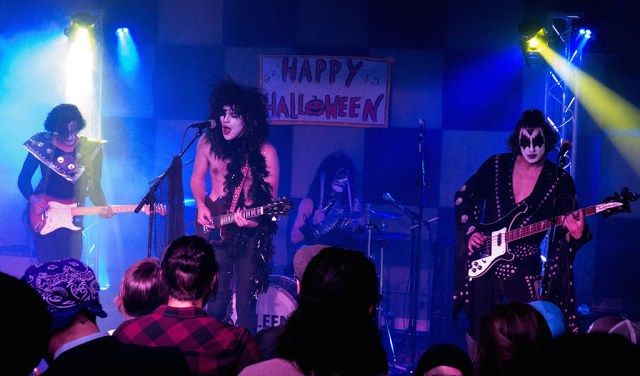